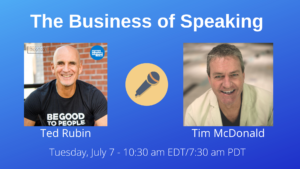 Join host Tim McDonald on The Business of Speaking Show as he’s joined by guest Ted Rubin to discuss how he got involved in speaking, how he’s turned speaking into a business and how he is continuing to evolve his business of speaking.

Tune in LIVE on Tuesday, July 7, 2020, at 10:30am EDT on YouTube. If you can’t make it live, be sure to subscribe to our YouTube Channel and get notified when the video is added to our playlist.

Who is Ted Rubin?

Ted was Chief Social Marketing Officer (a new title he created in 2011) of Collective Bias… and a principal shareholder until the November 2016 acquisition by Inmar.

In the words of Collective Bias Co-Founder John Andrews… “Ted, you were the vision, heartbeat and soul of Collective Bias, thank you for building a great company. From innovations like cb.Socially to the amazing relationships you built with the blogger community, clients and employees, you drove the epic growth.”

Videos about Ted and his philosophy…

Ted Talks about the value of “Return on Relationship”

The Dad That Doesn’t Quit

Want to receive exclusive content not available on The Business of Speaking Show or blog? Join our community for free and subscribe to our weekly newsletter.